An article in the Preußische Allgemeine Zeitung for the centenary of the death of the Hauptmann von Köpenick.
I must admit it’s a little more kindly disposed to him than I would be now, ein Schurke, ohne Frage.

My “new” original copy of “Noth= und Hülfsbüchlein für Bauersleute“, with which I am extremely pleased, also has a delightful dedication inside. Undated unfortunately but obviously old, note not just the handwriting but also the spelling of words such as “Theilen” and “zugestellet”. I presume the second part mentioned is “Arzneybüchlein für Menschen und Vieh“, which I’ve yet to find a decent copy of.
I wonder who Georg Scheidemann was, there’s a bookplate of his on the inside cover too.

This Essentials and Aid Booklet, which consists of two parts, is delightful to read and contains many useful things. I’ve provided it to the relevant Superintendent (Mayor?) Speckl with the request to lend it to each of those in the town, who wish to read it, and have the time and inclination to do so. The books must not be dirtied or torn.

I’m having great fun reading “Noth- und Hülfs-Büchlein für Bauersleute” from 1788, only a 1980 Taschenbuch at the moment but I think I’ll have to get an original copy.

I became aware of it’s existence after reading Pfarrer Köhler’s account of meeting the author in 1813/14 (Tagebuchblätter eines Feldgeistlichen), apparently in the late 18th Century it was second only to The Bible in popularity in Germany. It’s easy to see why.
Little anecdotes such as the Hauptmann’s wife’s grisly fate and the vicar keeping the elders out of the pub after Church by reading the book aloud (to the disgust of the landlord and delight of their families) are quite wonderful to read a couple of hundred years later by a foreigner like me, they must have seemed amazing at the time.

I wonder if the fate of the Hauptmann’s poor wife, buried alive in the crypt, inspired von der Marwitz’s fear of being buried alive? The book would no doubt have been known to him, or perhaps it was just a common fear before modern medicine got better at detecting these things? Much better I hope.

On a slightly lighter note, I loved the little poem about Beer and Wine, together with it’s charming illustration, particularly appropriate to me after the pubs here opened again last weekend.

I was amused by Dr. Köhler’s description of caricatures of Napoleon in Tagebuchblätter eines Feldgeistlichen from 13th December 1813:

Thanks to the wonders of the internet, while they’re left to us, here is the Pferdedieb himself, exactly as described in 1813:

Unrelated, but today I received my copy of the latest Berliner Extrablatt from www.berliner-schloss.de and enclosed was a miniature copy of an old key to the front door. A nice surprise. Possibly the closest I’m ever going to get to Berlin if this current Schwachsinn continues.

Sorry for the long delay, I’ve had, and still have, a lot of letters to write, amongst other stuff.

I wonder how long since copies of these two books have sat together?
Don’t tell anyone butt I had to cut the pages on the military account, no doubt the resale value was affected, but books are intended to be read, and there’s a guilty pleasure in knowing that in 172 years I’m the first person to see those pages.

Trying to get a grip on what happened during the Polnisch Aufstand in Posen in 1848 is not easy.

Willisen’s account, which I read first (although it’s an answer to the military account) because I acquired it first, sounds perfectly reasonable, especially I imagine to modern ears more used to calls to freedom and anti-imperialism. Basically the Poles are just looking to get some autonomy back after years of double dealing and germanisation by the Prussians, and all they need is a little more time to gain trust before they disband the various armed groups that had formed. Rumours of atrocities by the Poles are of course just exaggerations or downright fabrications by the Germans and the Jews. Even before reading the military account though I must admit to wondering if Willisen was not being a bit naïve.

The military account takes the more cynical view that the Poles just want total control over the country, not the promised reörganisation, and that all the negotiations are just buying them time to build up arms and train their fighters. Looked at from the Army’s point of view the accusations of attacks and atrocities by the Poles also sound a lot more credible.
Looking at events later in the year, and subsequent centuries, I think the military might have had a point, but it’s hard not to have some sympathy for Poland.

The conclusion? I think I’ll leave it to the reader to decide who was in the right, I don’t want to get involved. It reminds me too much of us English and the Irish, and nobody wants to go down that road…

Very pleased with my copies of “Die Lebensgeschichte des großen Königs Friedrich von Preußen“, or “Fridrich” if you go by the label on the spine… One of the source books that Carlyle used to write his history, and an author that he, unusually, had a good word for. Both volumes for under 50 quid.

It´s been rebound I think, but professionally and not recently, not at all bad for 1834.
I particularly like the instructions to the bookbinder at the front of the title page, which I presume should have been trimmed off;
“Nachricht für den Buchbinder: die Vorrede wird mit dem zweiten Theilen ausgege(ben?)”
although the Vorrede is, logically, attached to the first book? 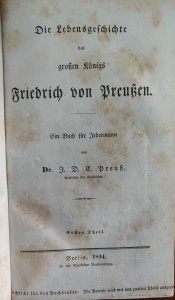